I have recently had a few enquiries from clubs looking to make changes to their sound system, so thought I would put together a quick spiel explaining some of the things to consider.

I will try to keep it as low tech as possible, but it is impossible to talk sound systems without some understanding of the terms involved.  Let’s start with speakers…

The first terms you might come across in regards to speakers is active (also known as powered) or passive (unpowered).  If the speaker is active, it has its own amplifier built into the speaker cabinet itself.  The benefits of this are that the amplifier built in matches the speakers capabilities, as the company that built the speaker designed them to work together.  These speakers need to be plugged in so will require a power plug near the speakers location as well as a cable running back to your sound source.

Your sound source (or input) is whatever is making the noise you want to come out of the speakers.  This could be a cd player, microphone for announcements, or even a phone or ipod connected with a cable or using Bluetooth. 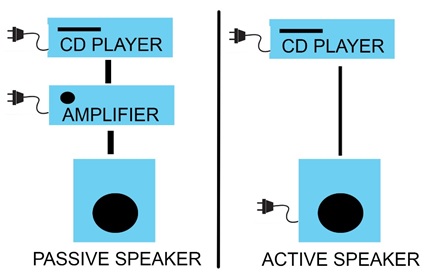 The other speaker term you may come across, particularly in larger clubs, is 100V (100 volts).  These speakers are a convenient way to connect larger numbers of speakers across long distances.  The sound quality is not as good but is a good way to pipe background music across a larger space.

Sound systems in malls and supermarkets (and large clubs with lots of ceiling speakers for example) are almost always 100v.  The amplifier and speakers run on a 100 volt system and are not compatible or interchangeable with the standard systems described above.  For example, you cannot connect a standard 8 ohm speaker to a 100v system or something will blow up. 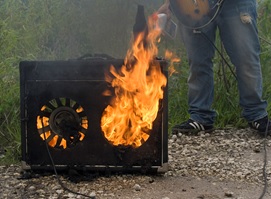 If you have multiple sound sources (perhaps a cd player or ipod, and a mic for announcements), then you need some way to choose what sound is playing and to adjust the volume of the various sound sources.  The mixer is what allows you to do this. 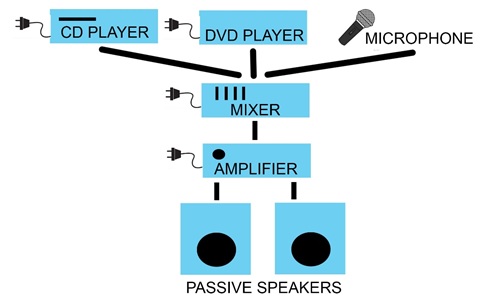 You may also need to send music and announcements to various rooms.  These are known as ‘zones’ in sound systems.  If you have four rooms which need sound at differing volumes, then you will require a mixer which has four zone outputs.  That also means speakers and amplifiers for those rooms also.

There are multi zone amplifiers available which are effectively a multi zone mixer with small amplifiers built in to drive passive speakers in the various zones.  This may be a more cost effective solution than multiple amplifiers and mixer, if you just need background music and a way to make announcements in your various rooms (zones).  A multi zone amp would not be suitable if you wanted to run bands or DJs, which would require a more substantial front of house sound system.

However, impedance (measured in ohms) can further confuse things.  Most speakers are 4 or 8 ohms, while some amps can drive loads as low as 2 ohms.  I can hear you switching off now, but just remember that joining lots of speakers together to run off one amplifier might seem like a good idea, but this will affect the impedance and will most likely overheat your amp.

Whether you connect multiple speakers in series or parallel will also affect the impedance but might be best to give me a call if you have questions on that side of things (or anything else sound system related).

If you have any further questions or would like to discuss specific requirements for your club please contact leigh@clubsnz.com